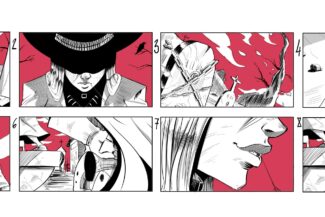 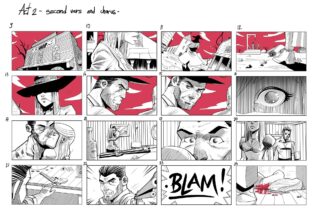 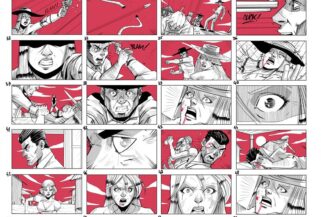 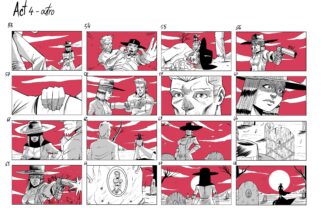 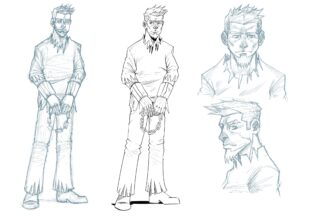 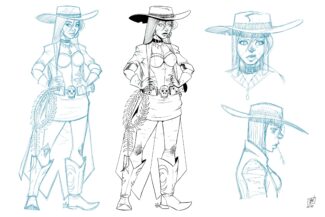 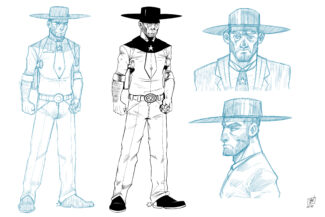 Our hero(girl) is walking towards West City 19, near the graveyard. Some gravestones got chains on them.
She is taking the Photo from her backpack (she is wearing a silver spoon as a necklace), with the Photo of the sheriff.

She walks (shot of her shadow), and after taking a corner, she founds a Sheriff in the middle of the town who is hanging some guy. Flashback ( starts every time we have a shot of her eye)
They are in a relationship and He goes crazy ( and shoot her.)

She takes her Gold Chain (weapon of Choice), and with revolver shoot the rope of the hanging guy and saves him.
The battle between the sheriff and her is starting.

She is losing the battle.
Flashback again (eye)
(She tries to get her revenge)
She comes and slice his head  with a bottle. That’s how he got his scar. Emphasizing his anger in the present.

Present
She is losing the battle. Sheriff gets a hold on her, but the guy she saves
Comes from behind and starts chocking the sheriff.

For the first time, she is taking her revolver and points it towards the sheriff.
She wants to kill him and take her revenge.
The guy who is chocking sheriff let the sheriff go

(Sheriff is in conscience)
The guy takes her hand (gun hand) and points it toward the ground.

(, she doesn’t want to kill the sheriff, and the guy helped her to understand that vengeance is bad, inner change of the main character)

(Ghost)
She stops by her grave with chains on the Grave board, and snaps her whip and breaks the chains on the grave…her soul is now free